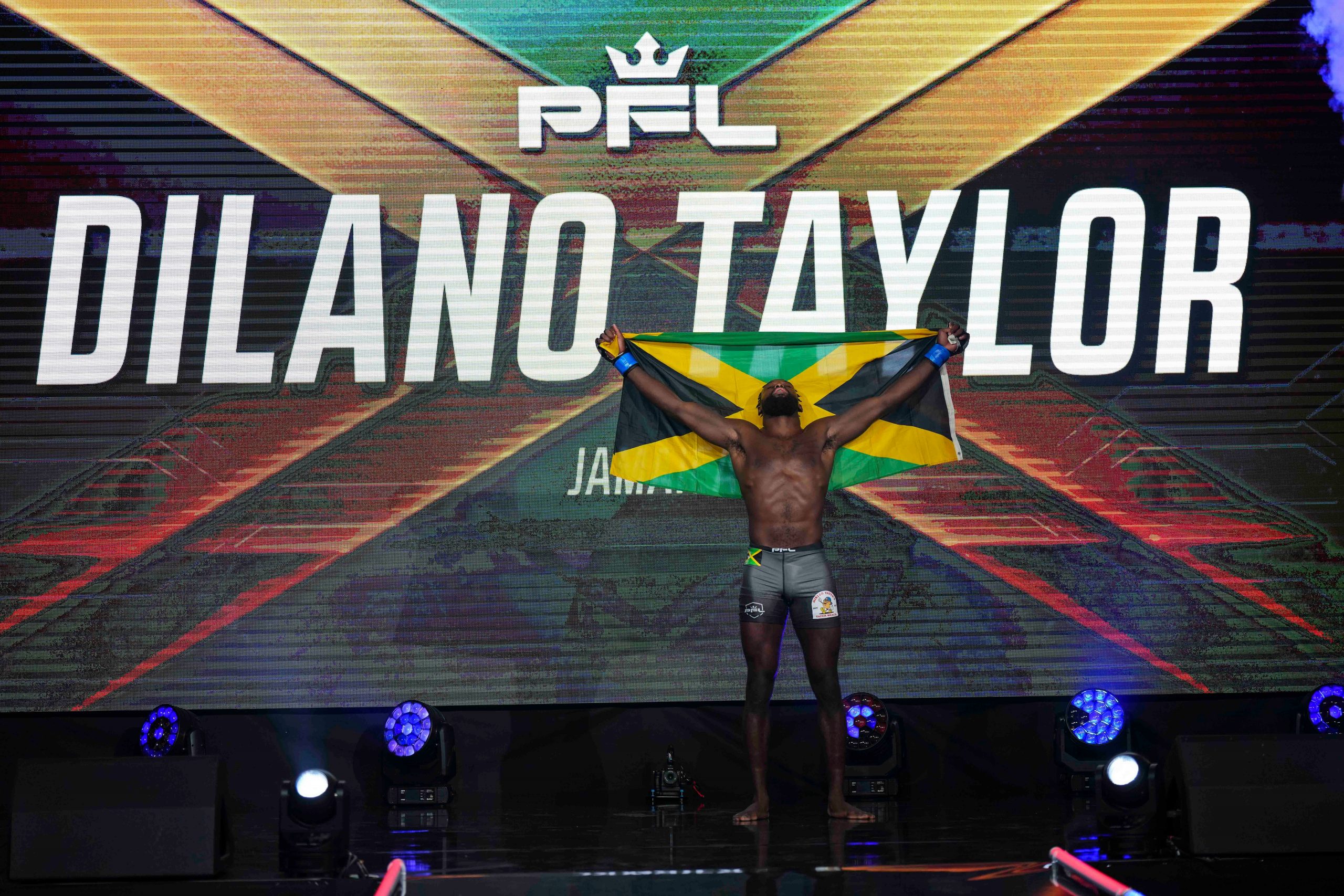 The Professional Fighters League’s (PFL) unique format of annual Champions (who gain the belt by first earning a spot in the Playoffs) is breaking the mould for MMA promotions. That’s why when it was confirmed the PFL was crossing the pond for the first time to have their Welterweight and Heavyweight Playoffs in Cardiff, we knew UK Fight Site had to be there. Cardiff’s Motorpoint Arena was a great venue and the fight card didn’t disappoint!

The 2022 PLF Playoffs had it all – a judge’s split decision, finishes (both submissions and knockouts/TKOs), point deductions, and even a no contest. On the night the fight card was split between showcase bouts, the Welterweight and Heavyweight Semifinals, and 2023 PFL Europe Qualifiers. The showcase fights that started the card included fighters at the beginning of their careers, but the skill sets on show were still to a high standard. The first fight of the night was a grappling and ground game clinic – Bajor beating Markes by unanimous decision – and in stark contrast, the second fight didn’t go to the ground once, with Mixan getting the win over Stigenberg via split decision. Mick Stanton was the first Briton on the card but unfortunately was on the wrong end of the first stoppage of the night, losing to Marcin Wojcik via rear naked choke. On the other hand, the first Welsh fighter did give the crowd something to cheer; Josh O’Connor locked in his own rear naked choke to defeat Emran Sakhizada. O’Connor was relentless with his takedowns and forward pressure, forcing Sakhizada to fight at such a fast pace that he fatigued in the third round.

The 2023 PFL Europe Qualifier bouts were sandwiched on either side of the Playoff main event semifinals. Each qualifier was a winner takes all battle, with the victor receiving an invite to fight in the European PFL season for 2023. These new European leagues in multiple weight divisions will be fought solely on European soil, and the Champion at the end of the season will be invited to fight in the PFL Global Season for a chance of winning the $1 million prize. Nathan Kelly fought his PFL European Qualifier before the main card and got the victory (rear-naked choke) in an impressive fashion over a homegrown talent to cause an upset; despite his home support, Ben Ellis had no answer for the vicious striking of Kelly, which had his head snapping back, as Kelly proved to be the faster and stronger fighter. The bonus PFL European qualifiers after the main card also included a countryman of Kelly earning a place in the European league as the Irishman Will Fleury proved to be too strong for Anthony Salamone and won by unanimous decision. The qualifier between Mokhtar Benkaci and Francesco Nuzzi was declared a no contest after Nuzzi received an eye poke that he was unable to recover from. The bout between Vojto Barborik and Radu Maxim also ended prematurely when Maxim got the victory via injury after successfully pulling off a reversal to take top position, which had trapped the right knee of Maxim in the process.

The first Heavyweight Seminal was a victory for Matheus Scheffel over Juan Adams via TKO/referee stoppage. Juan Adams was a last-minute replacement for top-seed Denis Goltsov (who couldn’t get a visa to fight in the UK), and this lack of a full-fight camp could be the reason Adams was showing signs of fatigue by the end of the first round. Adams had started strong, but as he tired, Scheffel was simply teeing off on the feet, and his powerful left hand had closed the right eye of Adams, which forced the ref to step in to stop the fight in the third round as Adams no longer appeared to be able to see the left hooks coming (and those hard shots were snapping his head back). The second Heavyweight Semifinal was over in the first round when Ante Delija defeated Renan Ferreira with powerful hammer-fists on the ground. Delija was relentless, pressing Ferreira back and giving him no space to utilise his striking, then once he got the takedown (impressively lifting the six-foot-eight Ferreira off the ground in the process) he used his ground game to position himself for the victory. Delija and Scheffel will now fight for the Heavyweight Championship belt (and of course the $1 million prize money). These fighters have already met in the 2022 PFL Season; in April Delija won via TKO in round two, so Scheffel will be hungry for revenge and Delija will be going into the Championship bout with his confidence high.

The first Welterweight Semifinals was Sadibou Sy v Carlos Leal, and the second was Rory MacDonald v Dilano Taylor (the main event of the night). Sy put on a counter-striking clinic, keeping Leal at the end of jabs and kicks as he walked down Sy to force the pace of the fight. Sy was on the back foot but still landing effective strikes, but the decision was put beyond doubt when Leal was deducted a point by the ref in the third round for an illegal knee to the groin within the clinch. Sy won by unanimous decision to earn his place in the Welterweight Championship bout, and will hope he can make it all the way to become champion this time. Sy will be facing Taylor in the Championship bout after his emphatic victory over MacDonald in the main event, after coming in on short notice to replace Magomed Umalatov (he couldn’t get a visa to fight in the UK). Taylor’s road to victory began with a hard right straight that he landed on the chin of MacDonald; the power of the blow dropped him to the ground and Taylor didn’t hesitate in following up with punches to secure the victory via TKO/strikes. Taylor was fast and loose on the feet, and MacDonald was reluctant to engage in striking, which led to him shooting for single legs from distance, and therefore wasn’t successful. After such an impressive knockout on a veteran like MacDonald, Taylor will be going into the Championship bout with Sy full of confidence, and one man will be coming out with the belt and the $1 million.

You have less than a week to wait for the next Playoff fight card as the PFL continue their holiday in the British Isles. On 20 August the Copperbox Arena in London will be hosting the Women’s Lightweight Semifinal and Featherweight Semifinals. UK Fight Site will be there again to cover the event – in East London, it’s literally walking distance from our base – and as all the fights are available on a free stream via the PFL website you’ve got no excuse not to watch along too, see you then!