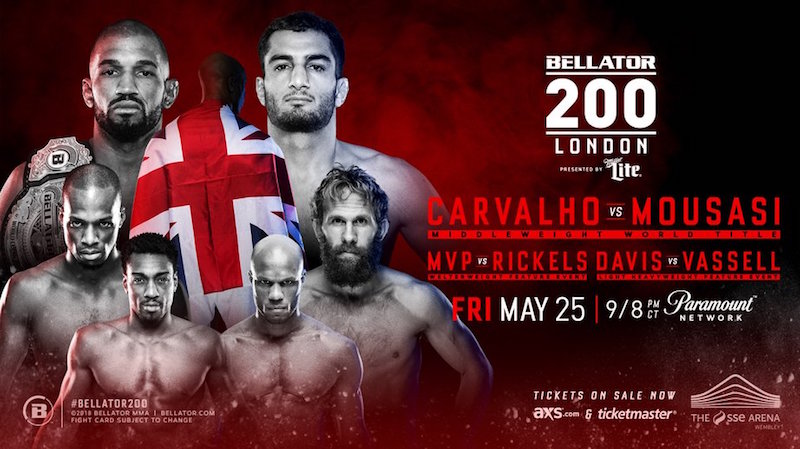 Bellator middleweight champion Rafael Carvalho will make his fourth title defence against Gegard Mousasi in the main event at Bellator 200 on Friday 25th May at the SSE Arena, Wembley in London. The middleweight title bout was promoted to the main event after an injury forced Mirko Cro Cop to withdraw from his bout with Roy Nelson.

Rafael Carvalho (15-1) is currently tied with former Bellator middleweight champion Alexander Shlemenko for the most middleweight title defences in Bellator history. The Brazilian has successfully defended his title three times since capturing the title in 2015. Carvalho was last seen in the cage at Bellator 190, where he scored a first round knock out against Alessio Sakara. The champion also picked up a pair of wins against Dutch kickboxer Melvin Manhoef. Gegard Mousasi (43–6–2) will come into this bout riding a six-fight winning streak. Mousasi is one of the most decorated fighters on the Bellator roster, having held titles in the Strikeforce, DREAM and Cage Warriors promotions. Gegard defeated Alexander Shlemenko via Unanimous in his Bellator debut last October.

0
0   0
previous The making of Darren Till: Beyond the Octagon - Full documentary
next UFC Fight Night: Thompson vs. Till Fight Card