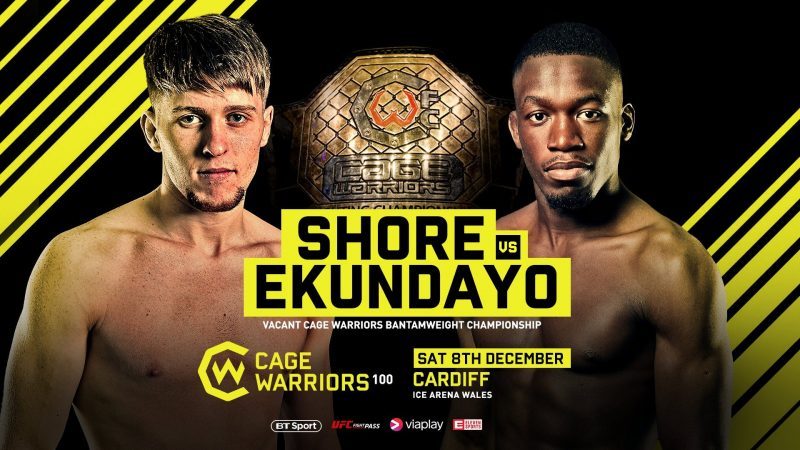 The battle between the two undefeated fighters has been brewing for a while now, especially since Shore called for fights with Ekundayo and his teammate Nathan Greyson.

Jack “Tank” Shore (9-0) won’t have much time to rest after headlining the sold-out Cage Warriors 97 last weekend. Shore stopped last-minute replacement Weslley Maia in the first round of the main event. Tank started the year off by defeating UFC veteran Vaughn Lee by unanimous decision at Cage Warriors 92: Super Saturday in March. Shore stopped all of his previous opponents in his professional career by KO/TKO or submission. Tank was undefeated as an amateur with an outstanding record of 12-0. The Welshman was crowned IMMAF lightweight champion after winning the 2015 IMMAF European Open Championships.

Mike “Airlines” Ekundayo (7-0) has had a busy year starting with his title win against Jonas Magard at Rise of Champions 5. The Brixton fighter followed up with a second-round stoppage of Tom Mearns at Bellator 200. The ROC bantamweight champion was last seen in a dominating performance at Cage Warriors 95 against Ed Arthur. Airlines will be eager to fight for the title that his Titan Fighter teammate Nathaniel Wood proudly wore from 2017 to 2018. Wood vacated the belt after two successful title defenses and signing with the UFC.

The undercard will feature Paddy Pimblett, Nicolas Dalby, Joe McColgan, Josh Reed and Kris Edwards. The finals of the Cage Warriors featherweight tournament also takes place at CW 100 with the winners of Aidan Lee vs. Paull McBain and Dean Trueman vs. Lewis Monarch fighting for the featherweight title.