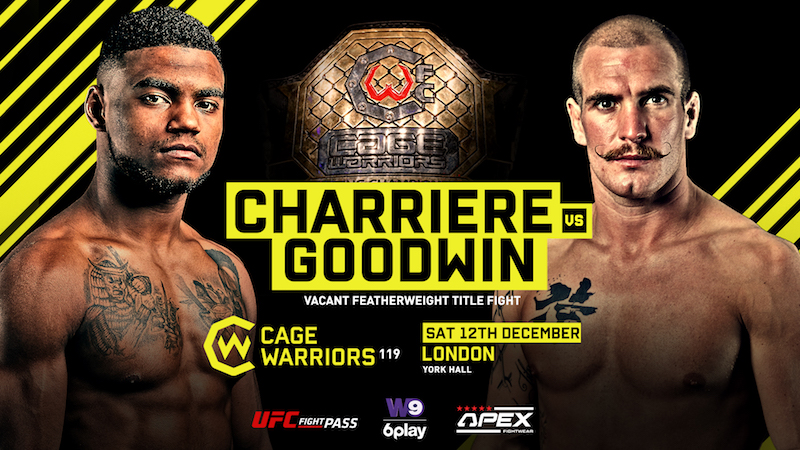 Morgan Charriere (16-7-1) defeated Perry Goodwin to capture the vacant Cage Warriors Featherweight title in the CW119 main event. The Frenchman looked impressive as he controlled the center of the cage with punishing leg kicks to the left lead leg. Morgan landed a big right hand that marked up his opponent but Goodwin was still game and traded punches with the Frenchman as the first round came to a close. Charriere landed an accidental low blow that briefly stopped the action and gave Goodwin time to recover. Perry landed a nice combination in the third round but it didn’t stop Morgan from coming forward and throwing a barrage of leg kicks and punches that backed Goodwin up. Morgan scored with a takedown and took the action to the ground where Goodwin attempted a guillotine and threw some strikes from off his back. Charriere never gave up control on the ground and eventually took his opponents back and landed more punches. Charriere landed a right hand that cut Goodwin above his left eye before sending Goodwin crashing to the canvas with a slick body shot where the Frenchman followed up with two more punches that forced referee Mark Goddard to step in and stop the action.

BODY SHOT! CHARRIERE IS THE CHAMP!

That was a special, special shot 👊 'The Last Pirate' will bring the belt home to France 🏆🇫🇷 #CW119 pic.twitter.com/ScRMsT9StF

Ian Garry gets it done! After a vicious finish, he targets the title 🏆

Damn! 🎥 Our slo-mo cameras caught that Christian Duncan finish and it's a thing of beauty.#CW119 pic.twitter.com/13ppqNC4uf