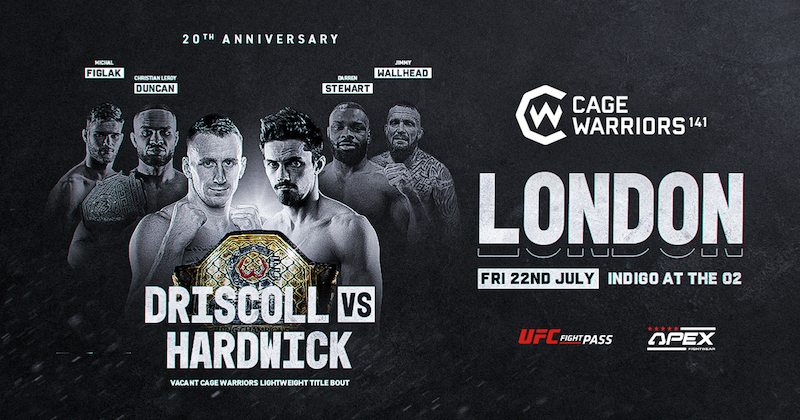 Cage Warriors returns to the capital to mark their 20th anniversary on Friday 22nd July at the Indigo at The O2 in London. The Cage Warriors 141 main event will feature America’s Kyle Driscoll braving enemy territory to take on George Hardwick for the vacant CW Lightweight title.

Kyle Driscoll (13-3) is a product of the famed American Kickboxing Academy in Coconut Creek, Florida. Driscoll defeated Joshua Jones via unanimous decision in the main event at Cage Warriors 133 last month. The American also appeared on season 4 of Dana White’s Contender Series, where he defeated Dinis Paiva via unanimous decision in the Featherweight division. Driscoll is on an eight-fight win streak that dates back to 2017.

Middlesbrough Fight Academy’s George Hardwick (9-1) will have the home-field advantage when he enters the cage on fight night with his last three fights taking place in London. Hardwick stopped Łukasz Kopera in the second round at Cage Warriors 134. George is currently on a five-fight win streak and has finished all three of his opponents under the Cage Warriors banner.

Cage Warriors Middleweight Champion Christian Leroy Duncan is scheduled to make his first title defense against a challenger, who is yet to be announced. Duncan defeated Djati Melan with a highlight-reel flying knee to capture the title at Cage Warriors 136 last month. The undefeated champion has finished five of his six opponents during his professional career in the promotion.

Darren “The Dentist” Stewart will make his return to the promotion after a 14-fight stint with the UFC. Stewart was set to make his return against Carlos de Souza at Cage Warriors 136 but the Brazilian withdrew after testing positive for COVID-19. The Dentist made his amateur and professional debuts under the Cage Warriors banner in 2013 and 2014 respectively.

Pre-sale tickets for Cage Warriors 141 will be available at 10am on Friday 6th May.