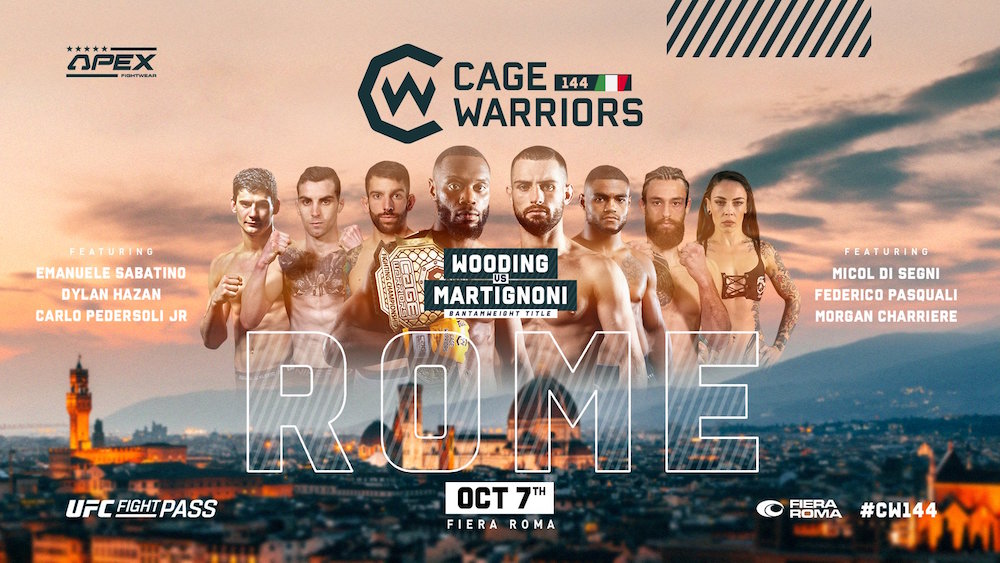 Dominique “Black Panther” Wooding (9-4) has gone 3-0 since joining the promotion last year. The Londoner converted the iconic York Hall into his personal slaughterhouse with three finishes against tough competition under the Cage Warriors banner. Dominique made an impressive promotional debut against Cameron Hardy at Cage Warriors 124, where he stopped his opponent in the first round. Wooding handed the previously undefeated Nathan Fletcher his first professional loss to capture the vacant Bantamweight title at Cage Warriors 127. The champion brutally stopped Carlos Abreu in 38 seconds for his first successful title defense at Cage Warriors 132.

Michele “The Italian Thunder” Martignoni (7-1) defeated Wooding’s teammate Weslley Maia by unanimous decision at Cage Warriors 117 in 2020. The Italian was submitted by Next Gen’s Nathan Fletcher in his next bout at Cage Warriors 122. Michele’s next bout with Adam Amarasinghe, unfortunately, ended in a no contest after suffering an eye injury due to an accidental eye poke. Martignoni made the trip to Belfast for Cage Warriors 140 where he defeated former title challenger Scott Malone via unanimous decision.

Micol di Segni (9-4) returns to the promotion after defeating Cory McKenna in a great fight at Cage Warriors 97 in 2018. The Italian also appeared on Season 3 of Dana White’s Contender Series where she dropped a unanimous decision to Mallory Martin in 2019.