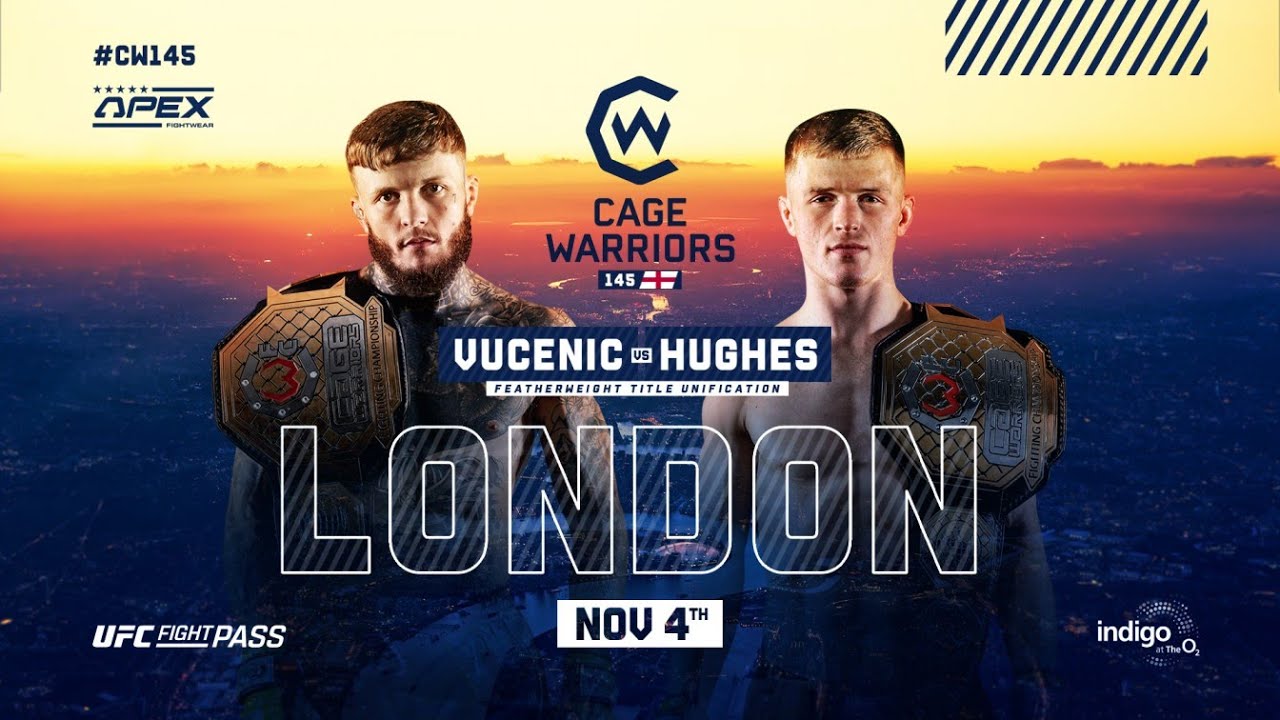 Paul Hughes defeated Jordan Vucenic in the Cage Warriors 145 main event to unify the featherweight title on Friday night at the Indigo at the O2 in London. Hughes improved to 9-1 and avenged his first professional loss in front of a rabid crowd of fight fans.

The London crowd was at a fever pitch for the fight built as the biggest rematch in Cage Warriors history.

Hughes missed a big left hand but continued to press forward forcing Vucenic to shoot in for a single-leg takedown attempt. Jordan landed a heavy leg kick and right hand as the pair exchanged in the center of the cage. Vucenic landed a knee to the body before the fighters briefly clinched against the cage. Hughes landed a kick to the body followed by a left-hand and leg kick. Paul went back to the body with another kick to the stomach. Jordan turned on the pressure with combinations and knees against the cage but Hughes kept his composure. The first round came to an end with the pair exchanging words while clinched against the cage with Hughes landing knees and punches.

The second round started off quickly with the champions exchanging blows in the middle of the cage. Vucenic landed a leg kick but Hughes was quick to respond with a head kick that sent the champion back against the cage. Jordan shot in for a takedown but Hughes managed to take his back. The Irishman locked in the body triangle and spent the rest of the round peppering the champion with punches and looking for submissions.

The champion came out aggressive in the third round unloading with combinations forcing Hughes to back up. An accidental clash of heads briefly put a stop to the action. Hughes slipped on the mat after attempting a knee and gave Vucenic the opportunity to take his back and look for the rear naked choke. Hughes dropped and cut Vucenic with a big knee and a flurry of punches before the round came to a close.

Hughes continued the momentum in the fourth round by dropping the champion with a slick combination that had him desperately clinging to Paul’s ankle. Hughes continued the onslaught on the ground opening up more cuts on Vucenic’s face. Hughes took Vucenic’s back where he controlled the action for the remainder of the round with punches to the bloodied champion.

Paul Hughes had a huge smile on his face as he came out extremely confident for the fifth and final round. The Irishman repeated the previous round by dropping Vucenic with a vicious combination. Hughes landed nasty elbows and punches on a battered Vucenic from half mount. Jordan desperately tried to get back to his feet but Hughes once again locked in the body triangle and landed punches as the fight came to an end.