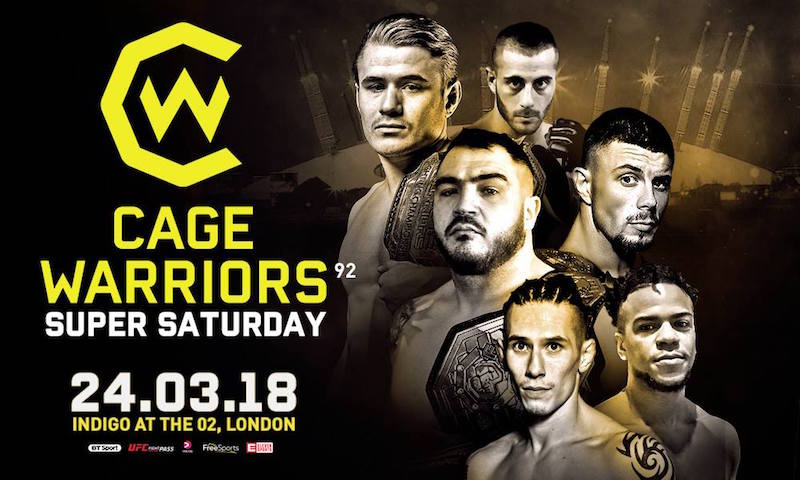 Cage Warriors returned to the capital on Saturday night for Cage Warriors 92: Super Saturday at Indigo at the O2 Arena in London. The atmosphere in the arena was electric with three title fights across two stacked main cards.

Cage Warriors Bantamweight Nathaniel Wood vs. Luca Iovine
Cage Warriors bantamweight champion Nathaniel “The Prospect” Wood successfully defended his title against Luca Iovine in the main event of the night. Wood (13-3) took 50 seconds to absolutely flatten Iovine in the first round. The Team Titan product knocked Iovine off balance with heavy low kicks that had the Italian struggling to keep his footing. The pair exchanged blows inside the pocket at a quick pace before The Prospect landed a crushing left hook flush on the Italian’s jaw that shut his lights out before he even hit the canvas.

Hearing the roar of approval from the London crowd proved that Cage Warriors has a bonafide star on their hands in Nathaniel Wood. The fans at the Indigo were chanting “UFC” during the post-fight celebrations, let’s hope UFC president Dana White is listening.

Cage Warriors Heavyweight Champion Mauro Cerilli vs. Karl Moore
The main event of the first main card of the night was headlined by a champion vs. champion super fight for the Cage Warriors heavyweight title. Cage Warriors heavyweight champion Mauro “The Hammer” Cerilli brutally destroyed Karl Moore in 15 seconds of round one. Cerilli and Moore met in the center of the cage, where the Irishman landed the first shots of the fight. The Hammer landed a right hand and quickly clinched up, where he was able to land some punishing knees. Cerilli caught Moore with a big right hand to the temple as he backed up from The Hammer’s onslaught.