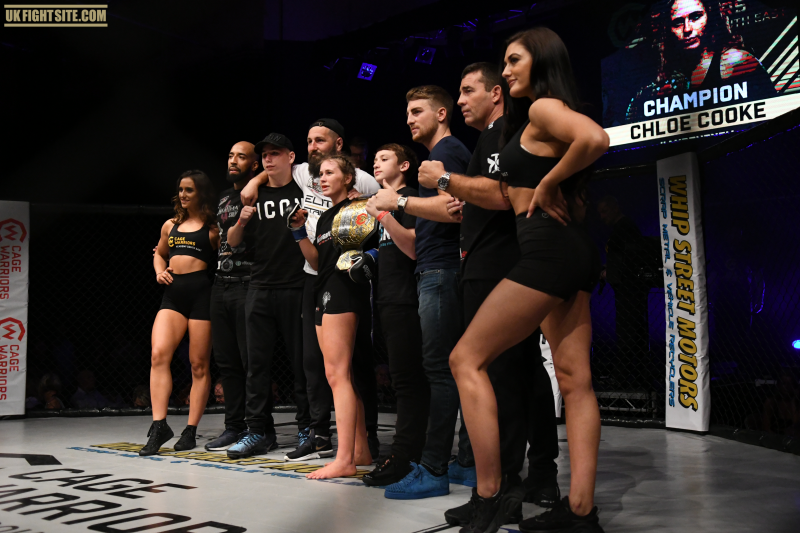 Team Underground proved they are a force to be reckoned with at Cage Warriors Academy South East 24 on Saturday night at the Charter Hall in Colchester. The Southwark based team led by MMA coach Steve Cooke and former ONE Championship Muay Thai Flyweight World Champion Jonathan Haggerty went 6-0 on the stacked amateur card.

Chloe Cooke submits Giulia Solito
Cage Warriors South East Strawweight Champion Chloe Cooke submitted the previously undefeated Giulia Solito and earned herself the Submission of the Night. The Muay Thai specialist demonstrated her Brazilian Jiu-Jitsu skills by threatening with a crucifix and an Americana in quick succession before locking in the fight-ending armbar in the second round. Cooke is now 2-0 in her amateur MMA career and already displaying the skills to take her to the top. 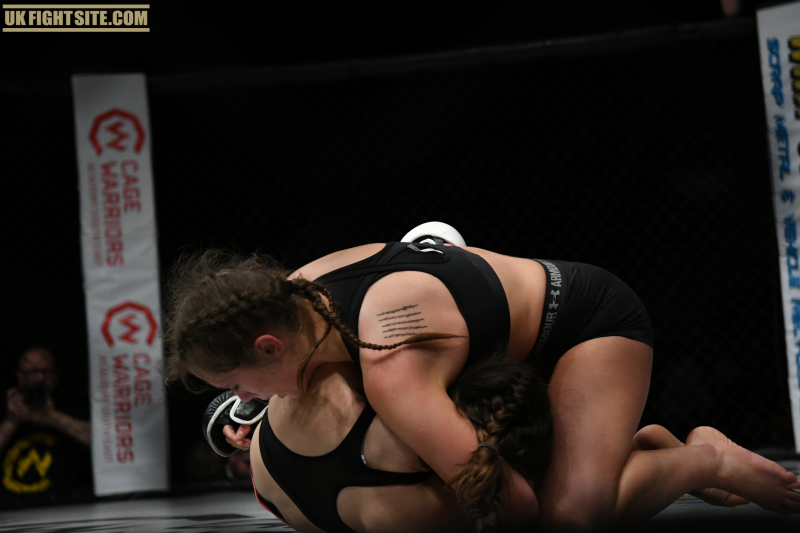 Will Drewitt defeated Yuki Angdembe
Will Drewitt (7-1) defeated the tough Yuki Angdembe via unanimous decision in one of the highlights of the night. Drewitt is now on a four-fight winning streak with his eyes on the Cage Warriors Academy South East Featherweight title but first, he must defeat Josh Grunsell at UCMMA 61 on Sunday 17th November. 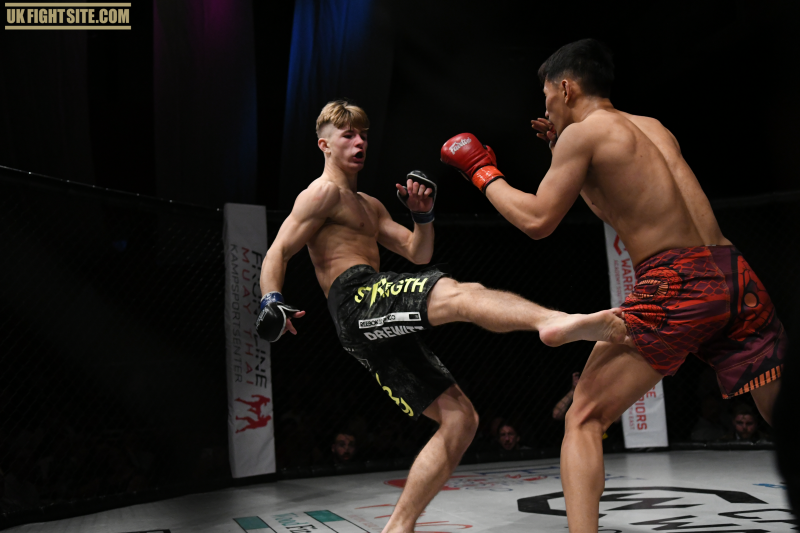 Shanelle Dyer stops Bezan Mahmudi
Shanelle Dyer improved to 3-0 in amateur MMA competition with a great TKO victory against the All-Stars Training Centre’s Bezan Mahmudi. The Muay Thai prodigy impressed with her striking skills but she also displayed a solid ground game and takedown defense against the three-time Swedish ADCC Champion. Shanelle stopped Mahmudi in the third round with 9 seconds remaining in the fight. Dyer will make the trip to Thailand in January, where she will begin a 1-year scholarship to train at Absolute MMA in Phuket. 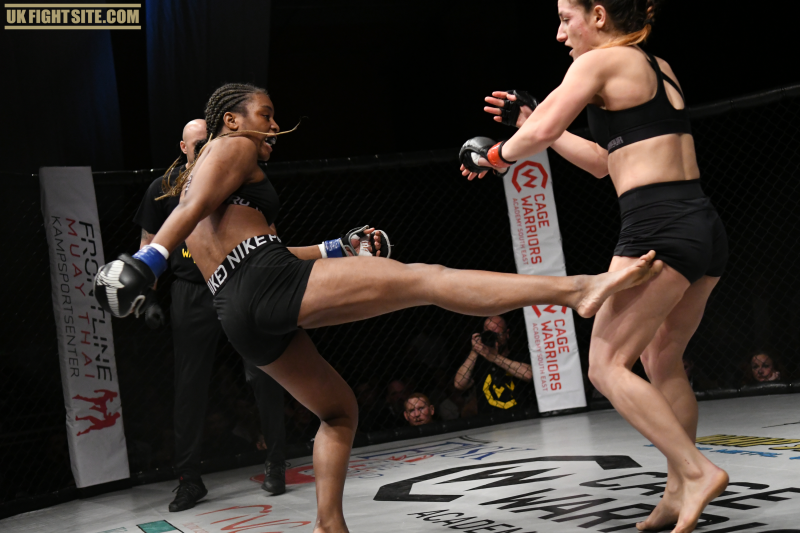 Erika Vorobjova stops Hanna Ingram
Erika Vorobjova (2-3) rebound from two losses in a row to pick up a win against BKK’s Hanna Ingram. Vorobjova dropped down to Bantamweight for this bout and put on a hard-nosed performance against a durable opponent. Erika punished Hanna with nasty ground and pound before finishing her with knees to the body in the second round. 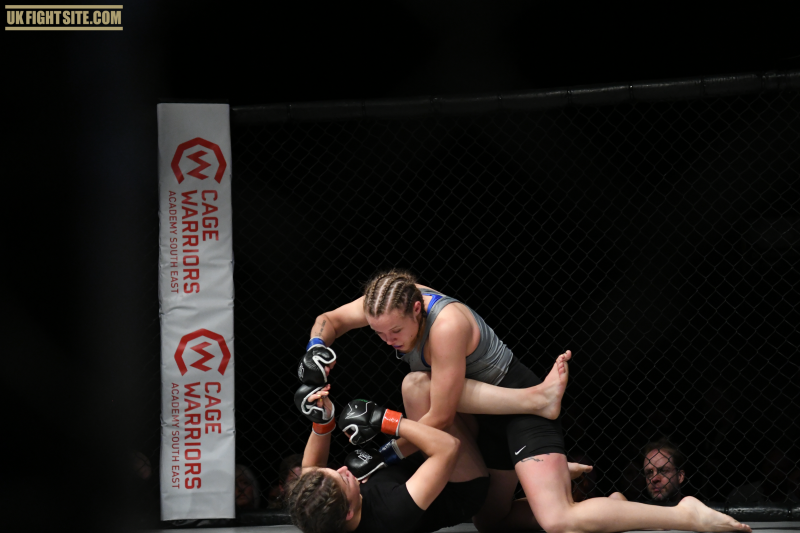 Jack Clarke knockouts William Timmis
Jack Clarke earned himself Knockout of the Night despite being on his back for the majority of the fight. Timmis immediately shot in for the double leg takedown and advanced from side control but Clarke never stopped working from his back. The end came when Jack started throwing hard hammer fists and punches to the side of William’s head knocking him unconscious. Jack improves to 4-1 with an impressive win over a two-division champion. 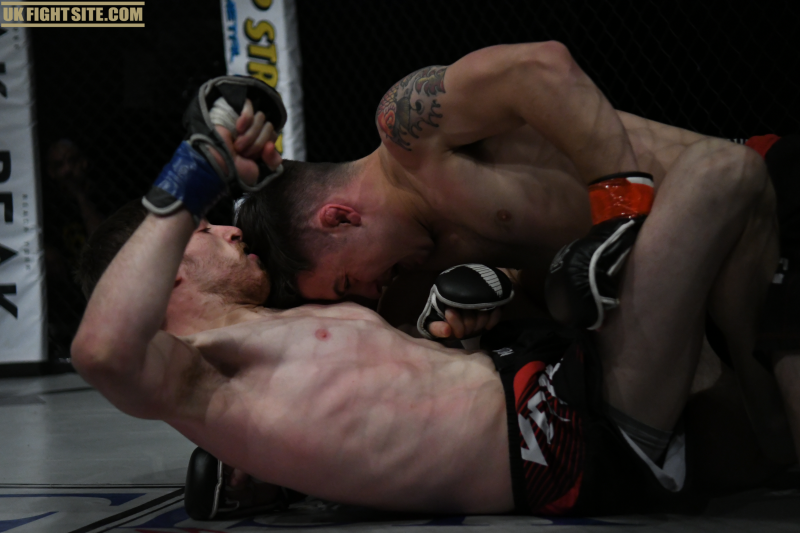 Jack Clarke working from his back (Photo by Benjamin Bowles)

Amir Ellithy submits Mosa Halam
The undefeated Amir Ellithy (3-0) submitted Mosa Halam in the first round with an inverted triangle. This is Ellithy’s third win in a row with all of his wins coming via submission. Amir is a veteran of the ECMMA and UCMMA promotions with a bright future in the fight game. 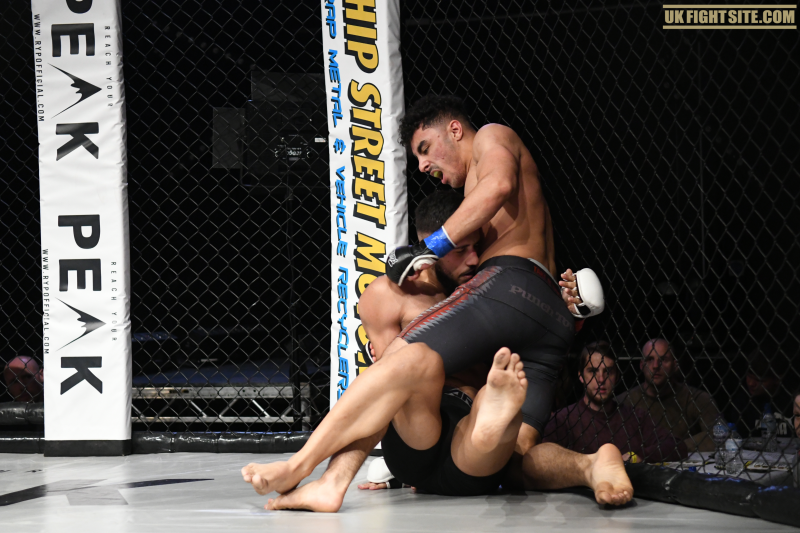