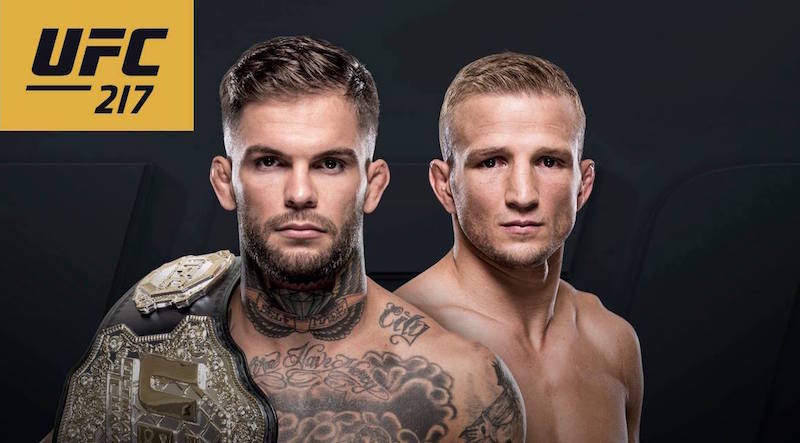 UFC Bantamweight Champion Cody “No Love” Garbrandt will finally face off against bitter rival T.J. Dillashaw at UFC 217 on Saturday 4th November at Madison Square Garden in New York City, USA. The former teammates were originally scheduled to face each other at UFC 213 but Garbrandt was forced to withdraw from the bout after sustaining a back injury. Garbrandt and Dillashaw coached opposite each other on The Ultimate Fighter 25, where things got psychical between the champion and his former Team Alpha Male teammate.

Garbrandt (11-0) had a tremendous year in 2016, going from an unranked Bantamweight to the undisputed UFC Bantamweight Champion. No Love scored three-first round knockouts before defeating Dominick Cruz to capture the title in the Fight of the Night at UFC 207 last December. The former champion Dillashaw (14-3) lost his title to Dominick Cruz last year before rebounding with impressive victories over tough opponents Raphael Assuncao and John Lineker. Dillashaw fell out with Garbrandt and Team Alpha Male after leaving the camp to train with their former striking coach Duane “Bang” Ludwig. The rivalry has intensified in recent months with Garbrandt claiming to have knocked Dillashaw out during sparring at Team Alpha Male.

UFC Middleweight Champion Michael Bisping is set to defend his title against the returning Georges St. Pierre in the main event.