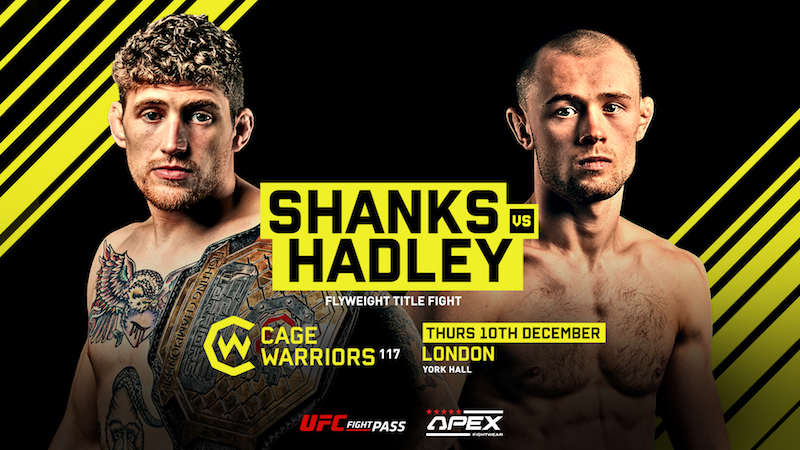 Cage Warriors kicked off the first of three back-to-back shows this week with Cage Warriors 117 on Thursday night at the iconic York Hall in Bethnal Green, London.

The undefeated Jake Hadley (7-0) defeated Luke “The Apocalypse” Shanks via unanimous decision to capture the Cage Warriors Flyweight title in the main event. Hadley put on a relentless and grinding performance across five rounds that the champion had no answer for. The rivals met in the center of the cage where they immediately started to trade shots. Shanks landed an uppercut but was too overeager on the follow-up and Hadley quickly shot in for the takedown. Shanks stayed busy off his back and continued to land elbows and punches. Hadley nearly secured the rear-naked choke in the final seconds of the round but the champion managed to survive the round.

Hadley scored another double-leg takedown at the start of the second round. The flyweights were stuck in a stalemate when Shanks attempted an omoplata and landed some punches. Shanks scored his first takedown of the fight but Hadley managed to scramble and score another takedown and take control on the mat at the close of the second round. The champion came out quick for round three but Hadley managed to get the fight to the ground again and got to full mount before taking Luke’s back. Hadley continued to land punches while he controlled the champion with the body triangle. Shanks once again charged out the gate to start the fourth round where Hadley quickly shot in for the takedown. The champion managed to say on his feet before Hadley finally completed the takedown and regained control on the ground.

Hadley appeared to motion to his rival for a touch of gloves at the beginning of the fifth round but was refused by the focused champion. Shanks started the round with a flying knee attempt but was taken down by the challenger. Jake landed ground and pound from half guard. The judges scored the bout 50-42, 50-45, 50-44 in favor of the new Cage Warriors Flyweight Champion Jake Hadley who improved to 7-0.