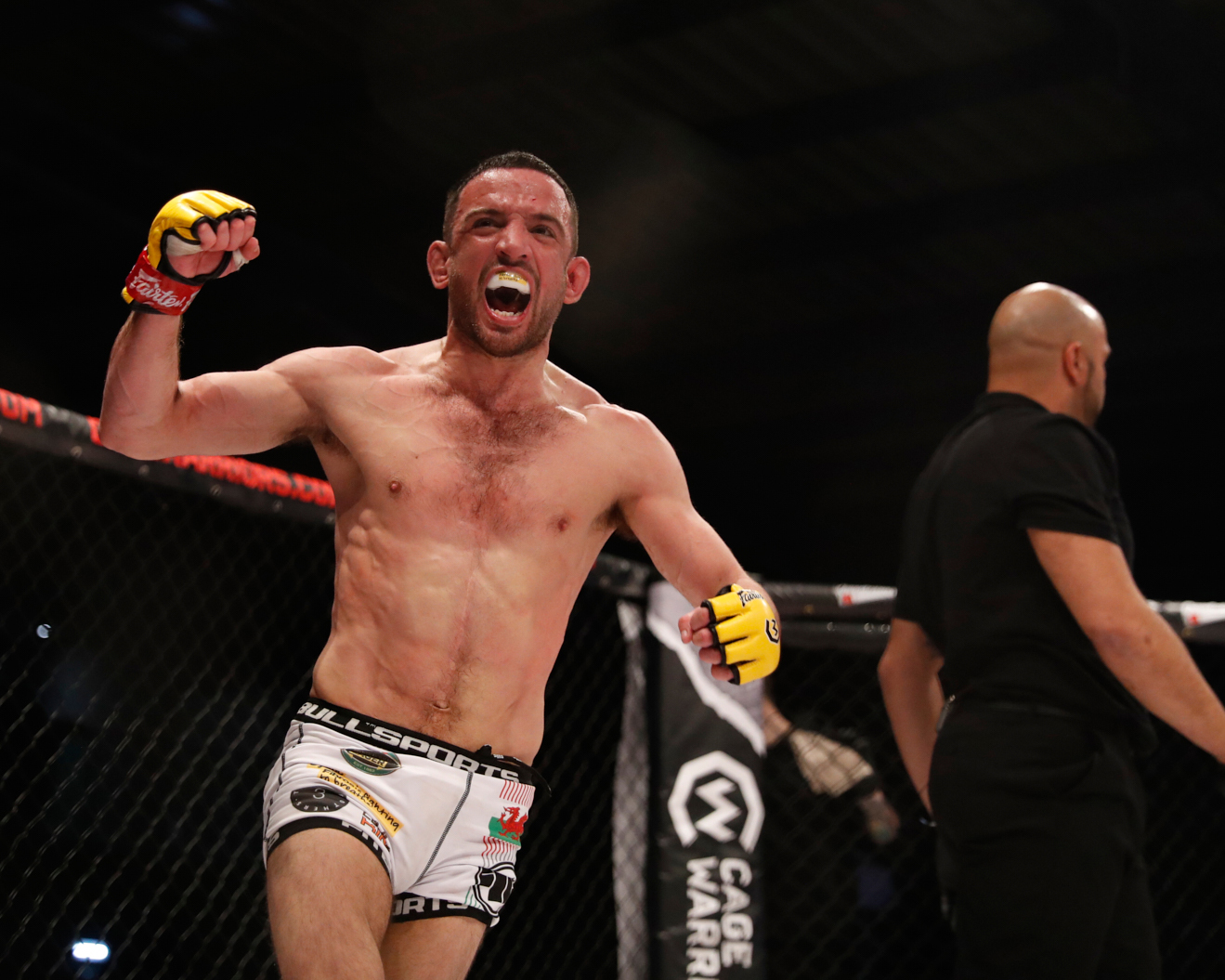 Cage Warriors 142, which takes place this Saturday August 13th in Ebbw Vale, Wales, will see Wrexham flyweight Aaron Aby (13-4-1) – who has defied cystic fibrosis and cancer to excel in MMA – aim to move a step closer to a coveted title shot with a win over Italian opponent Michelangelo Lupoli (5-2).

The bout will feature on the main card of an event that will be broadcast live on UFC Fight Pass. Tickets are available from Eventim.

Tell us about your preparations for this fight…

Aaron Aby: “Training camp has gone well. I’m always in the gym anyway so I never really take time off or anything. I just had to make a few adjustments, step things up a little bit, take it downwards with some other things and just look at getting prepared and excited really. Everything has gone well and I’m looking forward to it.”

You’ve been nominated for ‘Fighting Spirit of the Year’ at the World MMA Awards – how does it feel to get that recognition for what you’ve achieved?

AA: “Amazing, really. Since I went into mixed martial arts, it was for me about promoting a positive story and being able to give people hope. When I played football growing up, I didn’t tell anyone that I had cystic fibrosis; I would hide my tablets in my pockets and sneakily take them because I didn’t want to be picked because, or not because, of it. So it was something that I hid as a kid growing up a little bit, and then when I made the transition to MMA – which is an individual sport where the result is in your own hands – it was something that from the early days we were always representing the Cystic Fibrosis Trust – raising money, promoting that positive story, because I know when you’re going through a tough time you just need a bit of hope. If I’m able to give people that, then that’s something that I’ve always aimed to do. It’s one of my purposes since starting the sport. For me, this one means a lot, because it’s not just about your fighting ability. It’s about doing positive things for the community, doing positive things for other people, so I’m really honoured to be up there with those names who have made a positive difference in people’s lives. Like I’ve always said, my life isn’t a fairytale story with these fairytale endings of always being a success, but hopefully it’s one that will give people hope and can make people’s lives better when they need that support and something to help them. I was on my phone and I got tagged in a post by Cage Warriors – I didn’t expect it to be what it was. I’m honoured to be up there and competing for that award. It does mean a lot.”

Given the challenges you’ve faced, such as cystic fibrosis and cancer, did you ever think you would be where you are now, pushing towards a Cage Warriors title?

AA: “I always hoped I would get to this point, and you always go in there believing in yourself but also questioning yourself. That’s part of life and part of the game. Having that hope going through those tough times was something I could cling on to that would help propel me forward and give me that purpose going through those tough days. In hindsight, maybe I rushed back a little bit too quickly, being too light and everything, but I’m starting to find that momentum now and getting back up to a healthy weight to compete. I think having that hope and belief in myself would always push me and help me develop. I was always one growing up where if someone told me I couldn’t do it, I had to do it. The doctors saying I wouldn’t compete, telling my parents they need to do a will for me, it was motivation for me to be able to achieve something. Obviously I knew that Cage Warriors would be waiting when I got back, so I had that self-belief that I would be able to come back and compete at the highest level against the toughest guys and that was just something I clung on to and went for 100%. I’m one of those guys who’s got no quit in him and I will always keep going as long as I’ve got that purpose to propel me forward.”

Sam Creasey will be defending his title on this Saturday’s card – will you be keeping a keen eye on that title fight?

AA: “I’m glad Sam’s got a match-up again because I know he likes to compete and I respect him as a fighter and a person. I’ll be keeping my eye on that match-up. I don’t know too much about his opponent [Stipe Brčić], but I’ll be looking forward to it. I’ve always thought that the flyweights in Cage Warriors are the best in Europe and all worthy of UFC level. I’ll definitely be watching that fight and hopefully taking on the winner. Definitely my eyes are on the flyweight title, but I’d say my aim in this sport has always been to get to the UFC and also to spread my story on that biggest stage. Obviously Cage Warriors have given me a great platform to do that, and I think if I can get into the UFC, I can get my story out there which will be able to help more people on the world’s biggest stage against the best guys in the world. I’m in Cage Warriors at the moment and the next fight is against Michelangelo Lupoli, who’s a tough fight, but the future for me always has to have that goal of getting to the UFC. Whether I need a Cage Warriors title to do that, I’ll be looking to do that. If not, just getting into the UFC and having that chance will be great as well.”

This is the first time you’ve fought professionally in Wales – is that something you’re looking forward to, with this card being in your home country?

AA: “Definitely. Going through what I’ve been through, I just want the best experiences now in life. If you would have asked me while I was going through the cancer journey if I wanted to fight in Wales, it would have been up there with one of the things I wanted to do and I’m proud I’ll be able to do that. It will be something I’ll be able to tick off the bucket list because it’s going to be a great achievement for me, and it will mean a lot getting to compete in front of a home crowd. Being Welsh, growing up in Wales and being able to fight in Wales will mean a lot to me. It will definitely be an experience I won’t forget and just building on these life-changing experiences.”

What kind of atmosphere are you expecting?

AA: “The atmosphere is going to be amazing. The passion of the Welsh is something different. You get goosebumps before the football or the rugby while listening to the national anthem. It’s a small nation but it shows incredible passion and support for its own people and people who represent their country. I’m proud to be able to represent them on the night. I’m looking forward to the atmosphere, I love feeding off the crowd and everything, so that will be something I’m looking forward to enjoying on the night.”