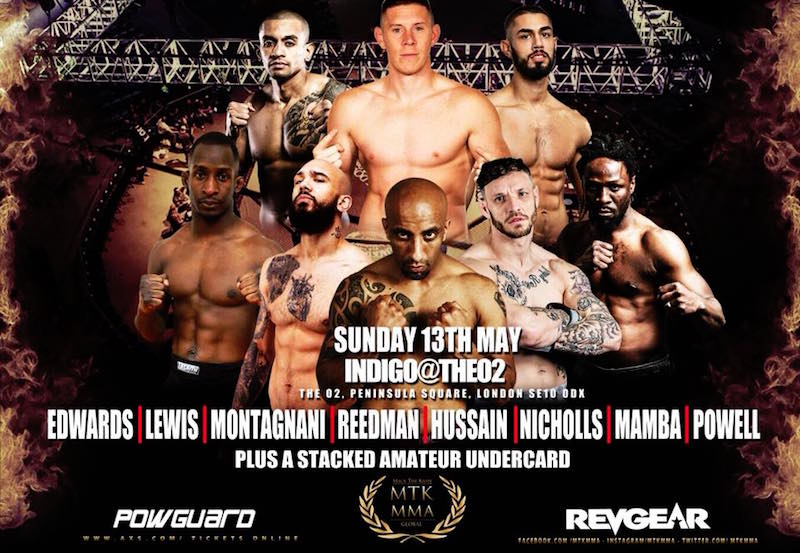 MTK Global MMA has released details of their inaugural fight card on Sunday 13th May at Indigo at The O2 Arena. The card is stacked with some exciting professional and amateur bouts. Tickets are available on www.axs.com

The card will be headlined by a bout between Alex “The Mean Albatross” Montagnani and Shah “No Pain” Hussain. Montagnani (10-3-1) is a BAMMA and Cage Warriors veteran fighting out of Yorkys Gym and representing the Savage Squad. Hussain (11-12) was last seen in action against UFC veteran John Maguire at Rise of Champions 4 last September.

A featherweight bout between Charlie Wright and Jordan “Pretty Boy” Powell will feature on the amateur card. Wright (4-1) recently became a two-division champion by capturing the WCMMA lightweight and featherweight titles in his last two bouts. The Keddles Gym representative defeated Will Drewitt at WCMMA 32 to win the featherweight championship. Jordan Powell will be looking to rebound from the first loss of his career on the card. Powell (2-1) recently challenged for the vacant WCMMA featherweight title against Will Drewitt. Jordan Powell is a member of the talented Savage Squad team alongside up-and-coming fighters like Jahreau Shepherd, Rico Biggs, and Ruben Lindo.