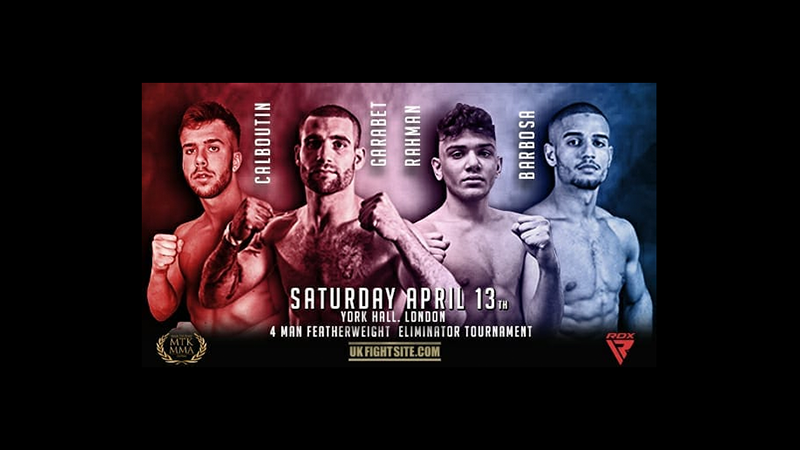 MTK MMA recently announced the 4 fighters participating in the Featherweight eliminator tournament for the inaugural MTK MMA Featherweight title on Saturday 13th April at York Hall in Bethnal Green, London. MTK MMA matchmaker Danny Beevor has stacked the deck with some talented Featherweights that will put on a show in East London.

Jabeed Rahman (1-0)
Jabeed Rahman will be looking to add the first professional title to his collection which already includes amateur titles in Cage Warriors Academy North West, Almighty Fighting Championship and Gladiator Promotions. Rahman had a highly accomplished amateur career where he went 8-0 and picked up 3 Featherweight titles. The undefeated Rahman made his professional debut against John Spencer at MTK MMA Newcastle: The Rising in November. The Team Fulinkazan fighter stopped Spencer via ground and pound in the first round.

Diego Barbosa (6-2)
Diego “The Barbarian” Barbosa comes into this title eliminator riding two submission wins from 2018. Barbosa made his MTK MMA debut with a first-round submission over Mickey Miller in October. The Barbarian quickly followed up with another first-round submission over Will Curry at Fusion FC 28. Diego is a product of Nova Forca Jiu-Jitsu, where he trains under head coach Ricardo Da Silva. The Brazilian is 6-2 in his professional career with experience in Bellator and BAMMA.

Joe Calboutin (1-0)
MTK Newcastle’s Joe Calboutin will take his first fight outside the North East when he steps inside the cage at York Hall. Joe made his professional debut last year at MTK MMA in Newcastle, where he stopped Evgenjis Volkovs in the second round. The Featherweight powerhouse went 3-0 as an amateur under the MMA Total Combat banner with 2 wins via TKO/KO and 1 submission win. Calboutin trains alongside Brad Tarren and Tommy Quinn under the tutelage of Richie Knox at MTK Newcastle. Calboutin is also scheduled to make his Bellator debut in his hometown at the Metro Arena on Saturday 9th February.

Huseyin Garabet (4-8)
Former UCMMA UK1 Featherweight Champion Huseyin Garabet is making his return to the cage after 2 years out of MMA competition. Garabet (4-8) is currently training with Mickey Papas at Team Titan. Huseyin has experience fighting in UCMMA, Killacam, Cage Warriors and BAMMA.