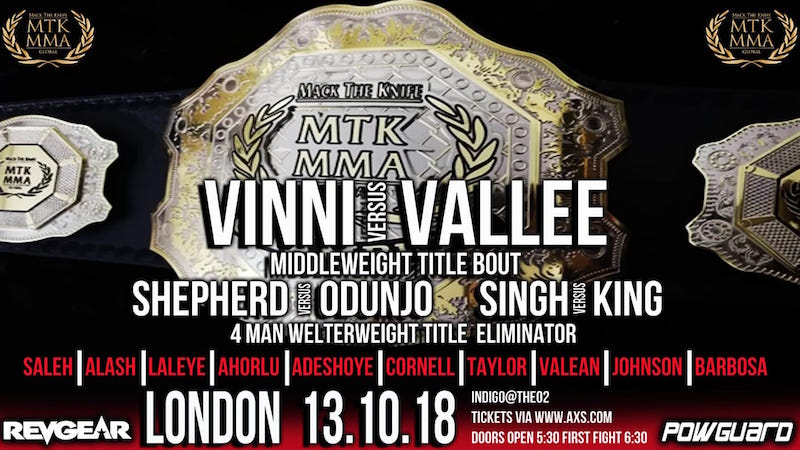 MTK Global MMA returns to the capital with a stacked card on Saturday night at the Indigo in the O2 Arena, London. The promotion will crown their first middleweight champion in the main event between Dan “Vinni” Edwards and Patrick Valle. The card will also feature a four-man welterweight eliminator to crown their inaugural welterweight champion with Jaz Singh vs. Tommy King and Tayo Odunjo vs. Jahreau Shepherd.

Main Event – Middleweight Title Bout: Dan Edwards vs. Patrick Valle
The main event features 2 fighters getting shots at the inaugural MTK middleweight title and redemption. Dan “Vinni” Edwards vs. Patrick Valle is a must-win situation for both men, who are returning after tough losses. The dangerous finishers will be looking to get back in the win column on the big stage at the Indigo arena. All of Vinni’s wins have come via KO/TKO or submission. The majority of Patrick’s 11 wins have come via KO/TKO and submission with only 1 win coming via decision. The Frenchman is a veteran of the Cage Warriors, BAMMA and M-1 Global promotions.

Welterweight Title Eliminator: Jaz Singh vs. Tommy King
Tommy “K.O” King was originally scheduled to fight Scott Jansen on the card but Jansen was forced to withdraw from the bout after breaking his ribs. King (1-1) was last seen in kickboxing action against Jamie Bates at GLORY 54. Tommy has a kickboxing record of 19-7-0 with 12 knockouts under his belt. King made his professional MMA debut against James Reedman at BAMMA 31 last September. King stopped Reedman in the first round after catching him with a superman punch and following up with an onslaught of punches.

Jaz Singh will be making his professional debut after going 5-3 in the amateur ranks. Singh has been earning his stripes in the Fightstar Championship and Rise of Champions promotions. The Team Crossface fighter is riding a 3 fight winning streak into this bout after stopping his last 3 opponents by KO/TKO.

Welterweight Title Eliminator: Jahreau Shepherd vs. Tayo Odunjo
Jahreau “The Nightmare” Shepherd takes on Tayo Odunjo in a fight that has all the makings of an absolute slugfest. Shepherd (1-1) is coming off his first professional win against Marcin Zwyica at Bellator 200 in May. The former Killacam middleweight champion was undefeated as an amateur with a 4-0 record. The Nightmare trains out of the Pound for Pound gym with the up and coming Savage Squad.

Tayo Odunjo has the difficult task of facing The Nightmare in his professional debut. Odunjo made his explosive MTK Global MMA debut against Jake Watkins in May. Odunjo brutalised Watkins in the first round forcing the referee to step in and stop the action. Tayo trains out of Steve O’Keefe’s Revolution Martial Arts and has an amateur record of 3-0.

Highlights From The Undercard

Tickets are available from www.axs.com