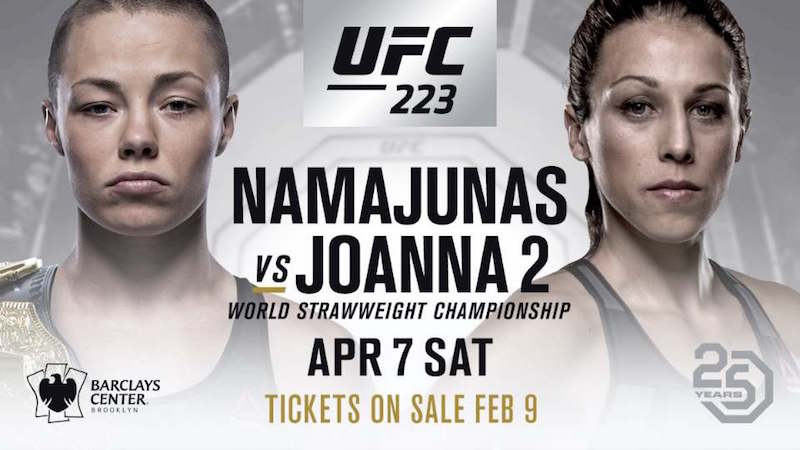 UFC women’s strawweight champion Rose “Thug Rose” Namajunas is set to make her first title defense against Joanna Jedrzejczyk in the co-main event at UFC 223 on Saturday 7th April at the Barclays Center in Brooklyn, New York. The rematch was booked after Namajunas upset Jedrzejczyk who was on the verge of breaking Ronda Rousey’s record for title defenses by a female UFC champion.

Rose Namajunas stopped Joanna Jedrzejczyk in the first round to capture the women’s strawweight title at UFC 217 in November. Namajunas beat Jedrzejczyk at her own game, outstriking and dropping the Polish fighter in the first round. Thug Rose ended the bout with a left hand that caught Joanna flush on the jaw before she tapped to strikes, ending the bout in the opening round. Rose also picked the Performance of the Night and $50,000 in bonus money.

Former UFC women’s strawweight champion Joanna Jedrzejczyk attempted to use her trademark mind games and intimidation tactics against Namajunas during the pre-fight media rounds for their first fight at UFC 217. The Polish fighter became the second woman to hold the title when she defeated Carla Esparza in early 2015. Jedrzejczyk went on to make five successful title defenses in the strawweight division.