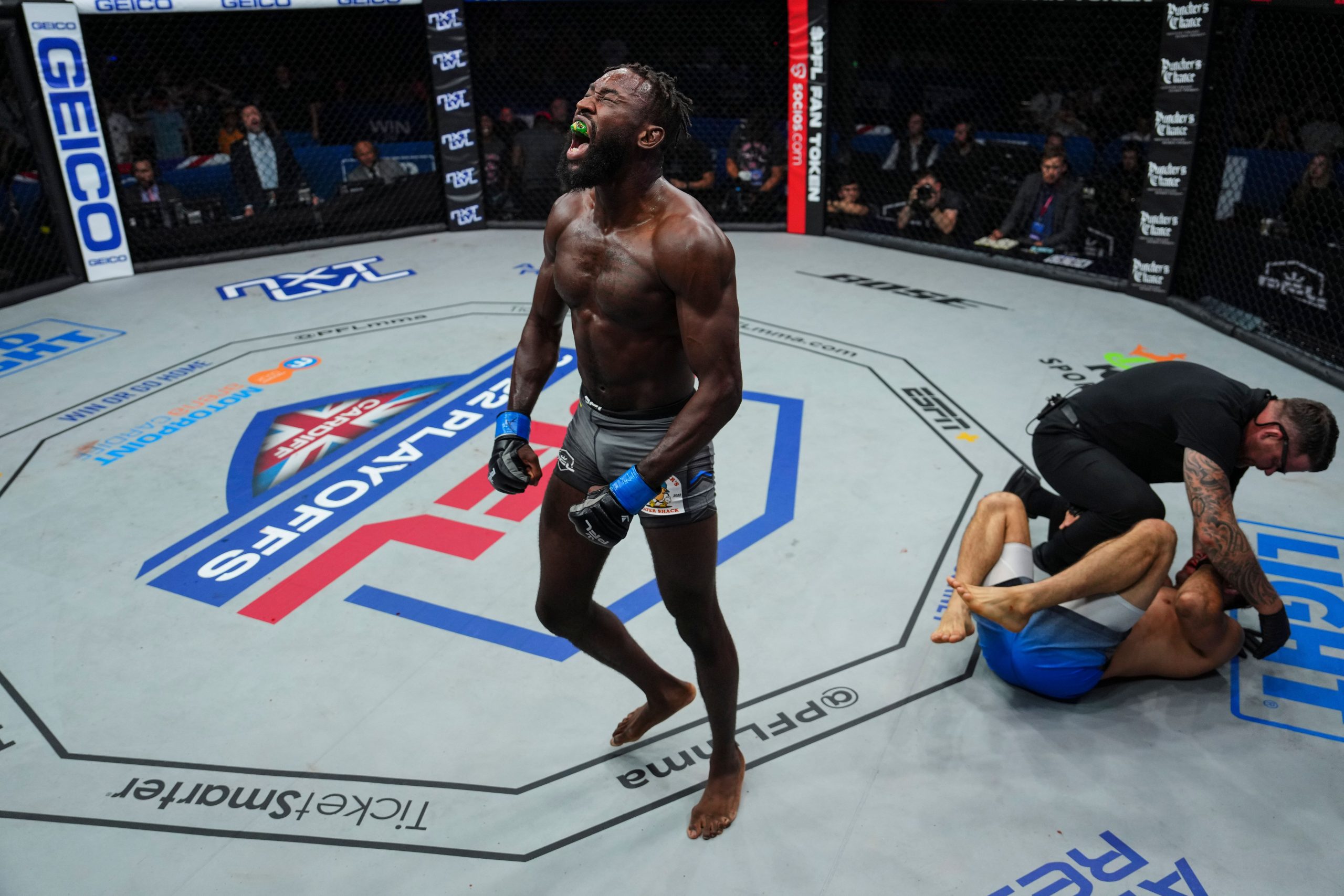 The Professional Fighters League (PFL) continued its 2022 Playoffs with an action-packed night at PFL 8 live from Motorpoint Arena in Cardiff, Wales. The evening’s card featured four Playoff bouts across the Heavyweight and Welterweight divisions, and four fighters advanced to the 2022 PFL World Championship.

In the night’s main event, Dilano Taylor, a late replacement, upset top-seed Rory MacDonald via first round TKO. The 25-year old Jamaican shocked the MMA legend by landing crisp jabs and heavy power punches. Taylor, who competed in the 2022 PFL Challenger Series, promised a changing of the guard and kept his word. Taylor will face Sweden’s Sadibou Sy at the PFL World Championship with a world title and $1 million in the balance.

In the evening’s co-main event, 2021 PFL Heavyweight Runner-Up and current number two seed, Ante Delija, squared off with Renan Ferreira, who came into the bout as the third seed. Delija, a Mirko Cro Cop protege, went straight at the 6’8” Ferreira, taking him down and finishing with a ground and pound TKO. Delija will face Matheus Scheffel at the 2022 PFL World Championship.

Scheffel matched up with Juan Adams in the first Heavyweight Playoff contest of the night. Scheffel dominated the match, and advanced to the PFL World Championship after defeating Adams via 3rd round TKO. In his first season with the PFL, Scheffel defeated 2021 PFL Heavyweight Champion Bruno Cappelozza, and now has a chance to claim the Heavyweight title and $1 million purse.

The 2022 PFL Playoffs continued with the Welterweight division, with the second seeded Sadibou Sy facing the third seeded Carlos Leal, with a trip to the PFL World Championship on the line. The contest went the three round distance with Sy defeating Leal by unanimous decision, snapping Leal’s 11 fight win streak. Competing in his fourth PFL Playoff semi-final, Sy earns his first trip to the PFL World Championship where he will face Dilano Taylor.

“PFL’s UK debut in Cardiff showcased the best MMA action in the world, as fighters earned trips to the PFL World Championship and competed for positions in the inaugural PFL Europe Season,” said PFL CEO Peter Murray. “We now look forward to the continuation of the 2022 PFL Playoffs on August 20 at Copperbox Arena in London.”

“The PFL athletes always rise to the occasion and give MMA fans the best action in the world,” said PFL President of Fighter Operations Ray Sefo. “Congratulations to the fighters moving on to the 2022 PFL World Championship and to our fighters who earned a spot in the inaugural PFL Europe season. I am looking forward to an exciting PFL Playoff finale next week in London.”

In the next PFL Europe qualifying match, Mokhtar Menkaci and Francesco Nuzzi fought to a no contest, with ringside physician halting the action in the second round due to an accidental eye poke. As a result neither fighter earned a 2023 PFL Europe roster spot.
PFL Europe qualifying action continued when Radu Maxim clinched a roster spot with a 1st round submission due to injury over Vojto Barborik. Maxim of Turin, Italy returned from a three plus year layoff to notch his 10th career win.

The final PFL Europe qualifier saw Will Fleury of Ireland defeat Anthony Salamone of France by unanimous decision. Fleury, a former UAE Warriors Middleweight Champion, kept the pressure on Salamone for the duration of the contest, collecting his fourth professional win and earning a roster spot on the 2023 PFL Europe roster.

In a showcase bout, Josh O’Connor pulled away from Emran Sakhizada earning a 3rd round submission victory, and now boasts a 2-0-0 career record. O’Connor, a native from Swansea, Wales, held an undefeated amateur record at 7-0.

Earlier action saw Marcin Wojcik matchup with Mick Stanton in a showcase bout. Wojcik earned the victory via 1st round submission, and 14 of his 16 career wins have come by way of finish. Wojcik moved his career record to 16-8-0, and has not had a fight go the full distance in over 6 years.

Kicking off the card on ESPN+ was a showcase bout between Szymon Bajor and Ronny Markes. Bajor took the fight to Markes, and defeated the Brazilian via unanimous decision, extending his win streak to four, with an overall career record at 24-9-0.

The PFL will return to action on August 20 live from Copper Box Arena in London, England, as the 2022 PFL Playoffs resumes with the Featherweight and Women’s Lightweight divisions. Two-time PFL World Champion Kayla Harrison will look to advance to her third straight PFL Championship appearance in the main event of next week’s PFL Playoffs. Meanwhile, top-seeded Featherweight Chris Wade matches up with Manchester’s own, Brendan Loughnane, and a victory earns him the chance to redeem himself with a return to the $1 million matchup.

All PFL 2022 Season events are live on ESPN, ESPN2/ESPN+ and ESPN3 (Spanish), as well as on premier global distribution partner platforms reaching 160 countries around the world.