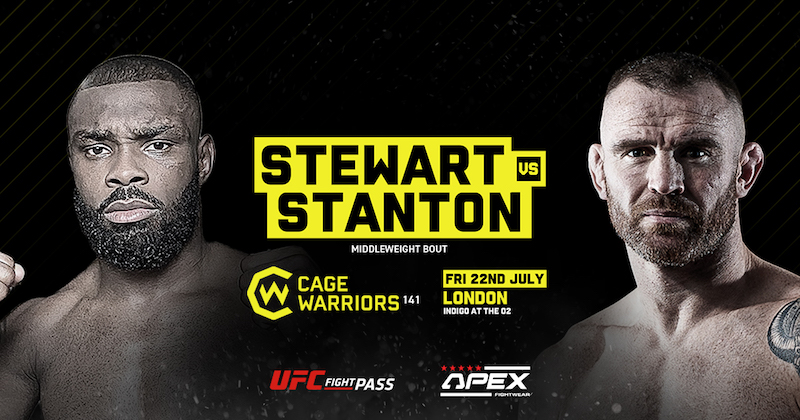 Mick Stanton will welcome Darren ‘The Dentist’ Stewart back to Cage Warriors on a blockbuster card in London this summer, which will mark the 20th anniversary of Europe’s leading mixed martial arts organisation.

A bout between the hard-hitting middleweights has been booked for CW 141 at the Indigo at The O2 on Friday, 22nd July.

For the first time since a 13-fight spell with the UFC concluded last August, Stewart will finally look to return to action after several match-ups fell through earlier this year.

The 31-year-old Londoner made the UFC move in 2016, after starting his professional career with a 7-0 run that included four Cage Warriors victories.

“I’m looking forward to putting on those yellow gloves again,” said Stewart. “It’s been a long time coming but it’s going to be nice to be back competing in my hometown, with family and friends coming to support.”

Stewart, whose UFC run included five wins and two Performance of the Night bonuses, has signed up for what has the potential to be a bruising battle with ‘The Huyton Hammer’.

Stanton comes into the fight on the back of successive TKO wins, having followed last June’s second-round triumph over George Smith with a third-round stoppage of Alexis Fontes this past April.

As he prepares to go in search of his seventh victory under the CW banner, the 35-year-old said: “Don’t miss this fight because it won’t be going the distance.”

Tickets are on sale NOW for Cage Warriors 141, with more fights to be announced over the coming weeks. The clash of Kyle Driscoll and George Hardwick for the vacant lightweight title, as well as the return of veteran Jimmy Wallhead for a welterweight tussle with Daniel Skibiński, have already been confirmed.