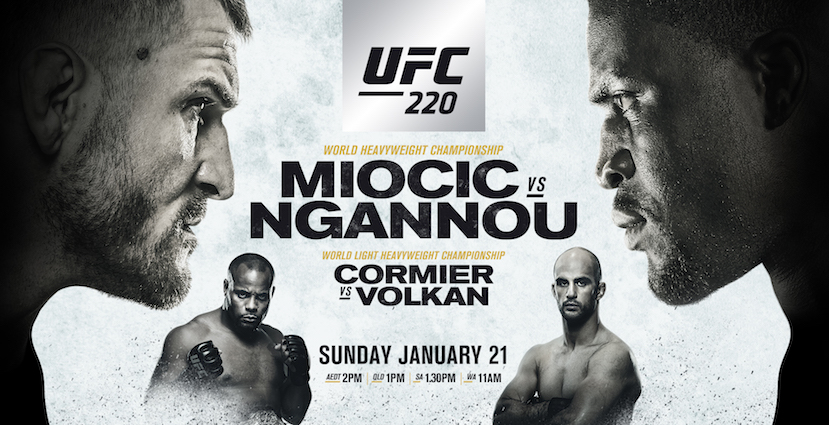 UFC Heavyweight Title Bout: Stipe Miocic (c) vs. Francis Ngannou
UFC heavyweight champion Stipe Miocic is in line to become an all-time heavyweight great with a successful title defense against Francis Ngannou at UFC 220. Miocic (17-2) needs one more win to set the record for the most consecutive UFC heavyweight title defenses in history. The champion captured the title by knocking out Fabrício Werdum in the first round at UFC 198 in May 2016. Miocic followed up with another brutal first-round knockout over Alistair Overeem at UFC 203 which earned the pair Fight of the Night honors and $50,000 each in bonus money. Stipe only fought once in 2017 with a dominating title defense over Junior Dos Santos at UFC 211 in May. Francis “The Predator” Ngannou is fresh off what many consider to be knockout of the year against Alistair Overeem at UFC 218 in December. The Cameroon-born Frenchman only needed 1 minute and 42 seconds in the first round to put Overeem to sleep with a sickening uppercut. Ngannou (11-1) is currently undefeated under the UFC banner with six wins in the heavyweight division. The Predator started off 2017 with a first-round TKO over former UFC heavyweight champion Andrei Arlovski at UFC on Fox in January.

UFC Light Heavyweight Bout: Daniel Cormier (c) vs. Volkan Oezdemir
UFC light heavyweight champion Daniel Cormier will face-off against the surging Volkan Oezdemir in the co-main event. Cormier will be looking to rebound from his devastating knockout loss against Jon Jones at UFC 214 in July. The decision was later overturned and changed to a No-Contest after tested positive for a banned substance. Volkan Oezdemir tore through the competition in the light heavyweight division in 2017. Oezdemir (10-1) made his UFC debut with a split decision victory against Ovince Saint Preux at UFC Fight Night in February. Volkan went on to put the division on notice with a quick succession of first-round knockouts in the octagon. The Swiss kickboxer followed up with a knockout against Misha Cirkunov in 28 seconds at UFC Fight Night in Stockholm, Sweden. Oezdemir got into the No.1 contender position with a 42-second knockout of the powerful Jimi Manuwa at UFC 214 in July.