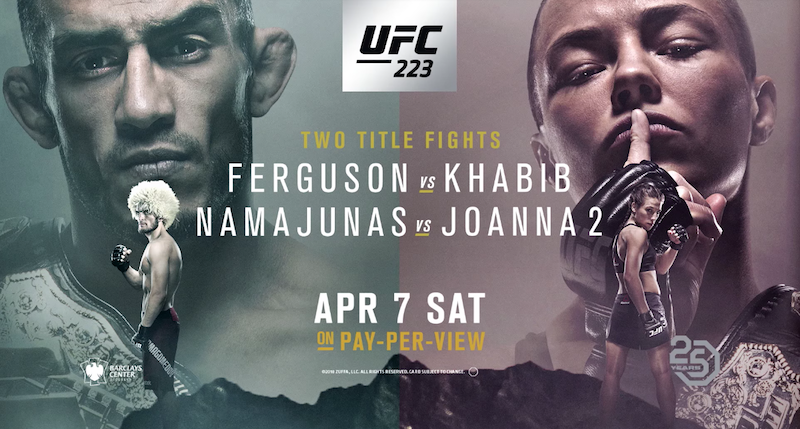 Interim UFC lightweight champion Tony Ferguson will finally meet the undefeated Khabib Nurmagomedov inside the Octagon at UFC 223 on Saturday 7th April at the Barclays Center in Brooklyn, New York.

Tony “El Cucuy” Ferguson (23–3) submitted Kevin Lee with a triangle choke at UFC 216 to capture the interim UFC lightweight title. Ferguson is currently riding an incredible ten-fight winning streak in the lightweight division. El Cucuy has picked up eight post-fight bonuses in his UFC career including six Performance of the Night and Fight of the Night awards.

Khabib “The Eagle” Nurmagomedov (25-0) put on an absolutely brutal display against Edson Barboza at UFC 219. The Russian brutalised Barboza with his ground and pound over three rounds earning himself Performance of the Night. Nurmagomedov pulled out of his last scheduled bout with Ferguson at UFC 209 after a disastrous weight cut sent him to the hospital.

UFC women’s strawweight champion Rose “Thug Rose” Namajunas will rematch former champion Joanna Jedrzejczyk in the co-main event. Namajunas (7-3) upset Jedrzejczyk in the first round for the UFC women’s strawweight title at UFC 217. Thug Rose outstruck the former Muay Thai champion on the feet, dropping her twice in the first round. Prior to UFC 217, Joanna Jedrzejczyk (14-1) was only one win away from tying Ronda Rousey’s record for six title defenses in the UFC’s women divisions. The Polish fighter blamed her upset loss to Namajunas on a bad weight cut, claiming she cut 15 pounds in 14 hours prior to their bout.