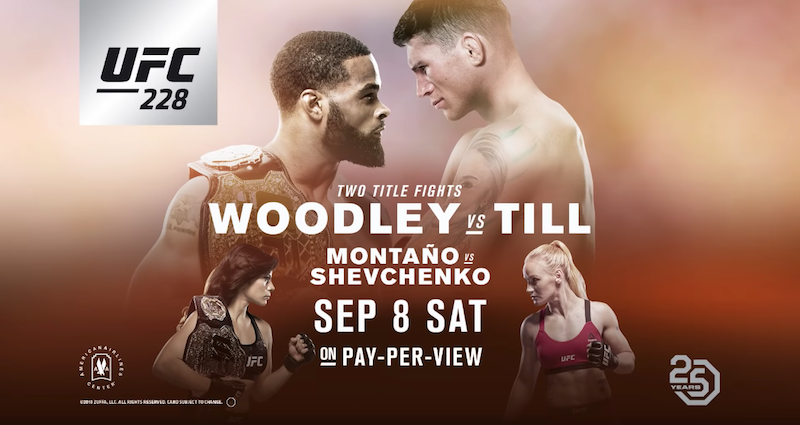 UFC 228 Results: Woodley submits Till in 2nd round

UFC welterweight champion Tyron Woodley handed Darren Till his first professional defeat in the main event at UFC 228 on Saturday at the American Airlines Center in Dallas, Texas.

UFC welterweight champion Tyron Woodley defeats Darren Till via Submission in Round 2
Tyron Woodley defeated the previously undefeated Darren Till to successfully defend his title for the fourth time. Woodley came out aggressive in the opening round with an early flurry of punches and a knee. The champion secured the clinch against the cage and attempted the takedown before the referee broke up the clinch. Tyron backed the Scouser up with a big right hand that partially landed. Woodley mixed things with a straight to the body and high kick. The Chosen One went for the single leg takedown but ended up in the clinch against the cage, where Woodley landed knees to the thighs.

The second round opened with Darren Till looking more aggressive and prepared to engage but Woodley dropped him with a great right hand that landed flush on the jaw. The champion followed his opponent to the ground, where he landed massive punches and elbows that opened a cut on Till’s head. Tyron worked his way into half guard and continued his onslaught of elbows. Woodley slipped in the D’Arce choke and forced Till to tap out. Woodley’s coach and UFC veteran Din Thomas presented him with his Brazilian Jiu-Jitsu black belt during the emotional post-fight celebrations.

UFC 228 Preliminary Card Results
Women’s Strawweight: Tatiana Suarez def. Carla Esparza via TKO (punches and elbows) in Round 3 at 4:33
Bantamweight: Aljamain Sterling def. Cody Stamann via Submission (kneebar) in Round 2 at 3:42
Welterweight: Geoff Neal def. Frank Camacho via KO (head kick) in Round 2 at 1:23
Middleweight: Darren Stewart def. Charles Byrd via TKO (elbow and punches) in Round 2 at 2:17

UFC 228 Bonuses
The winners were awarded $50,000 bonuses
Fight of the Night: Irene Aldana vs. Lucie Pudilová
Performance of the Night: Tyron Woodley and Jessica Andrade