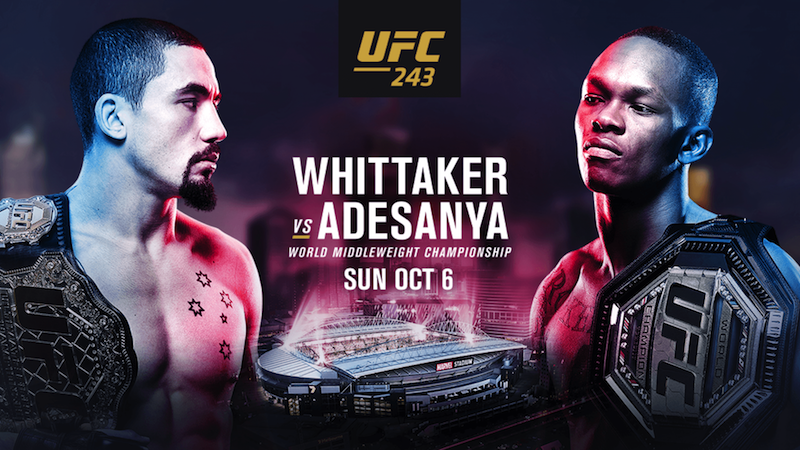 UFC Middleweight Title Bout: Robert Whittaker (c) vs. Israel Adesanya (ic)
Robert Whittaker (20-4) has been out of action since he was forced to withdraw from his title defense against Kelvin Gastelum at UFC 234 in February. The champion underwent emergency duel surgery for a twisted and collapsed bowl in addition to an internal hernia. Robert’s last appearance in the Octagon was against Yoel Romeo in a non-title fight at UFC 225 in June 2018. Whittaker defeated Romero via split decision in an amazing bout that earned the pair their second Fight of the Night award. Robert is on a 9 fight winning streak and has undefeated since moving up to the Middleweight division.

The undefeated Israel Adesanya (17-0) defeated Kelvin Gastelum via unanimous decision to capture the Interim UFC Middleweight title at UFC 236 in April. The New Zealander has picked up 3x Performance of the Night and 2x Fight of the Night bonuses since joining the promotion in 2018. Adesanya scored the biggest win of his career in Melbourne, Australia when he defeated former UFC Middleweight Champion Anderson Silva at UFC 234 in February.