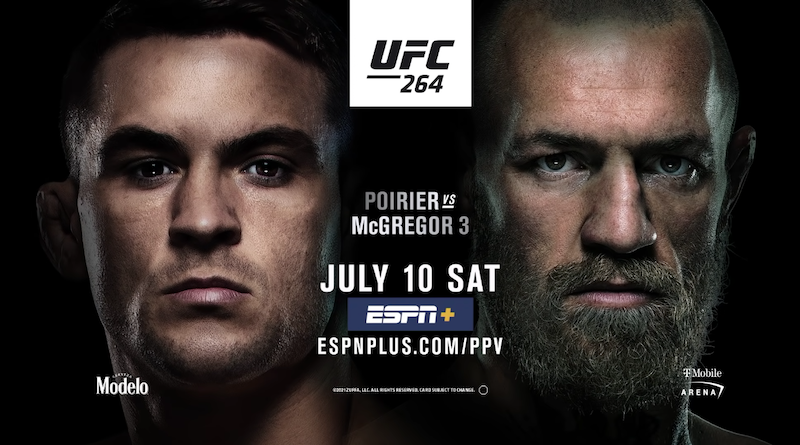 Dustin “The Diamond” Poirier defeated Conor McGregor via first-round TKO to complete their trilogy on Saturday night at UFC 264 at the T-Mobile Arena in Las Vegas, Nevada, USA.

The trilogy might be complete but the rivalry is far from over due to the anti-climatic finish of the bout when suffered a nasty ankle injury in the first round. McGregor came out aggressive at the start of the round with a kick heavy offense that included spinning back kicks and several leg kicks, one of which Poirier checked and acknowledged by pointing down at McGregor’s leg. Poirier responded with his own leg kicks and a flurry of punches that forced McGregor to clinch up. McGregor locked in a guillotine choke but Poirier escaped the attempt and proceeded to dominate McGregor on the ground where he cut the Irishman with big elbows and punches. Back on their feet, the pair exchanged shots and McGregor stepped back awkwardly and fell to the canvas in pain where Poirier followed him with some furious ground and pound in the final seconds of the round. The referee Herb Dean and cage-side doctors immediately checked on McGregor who was visibly in pain and called a stop to the fight.

Former UFC Featherweight and Lightweight Champion Conor McGregor (26-6) has lost two fights in a row for the first time in his career and has only won one of his last four fights in the Octagon.