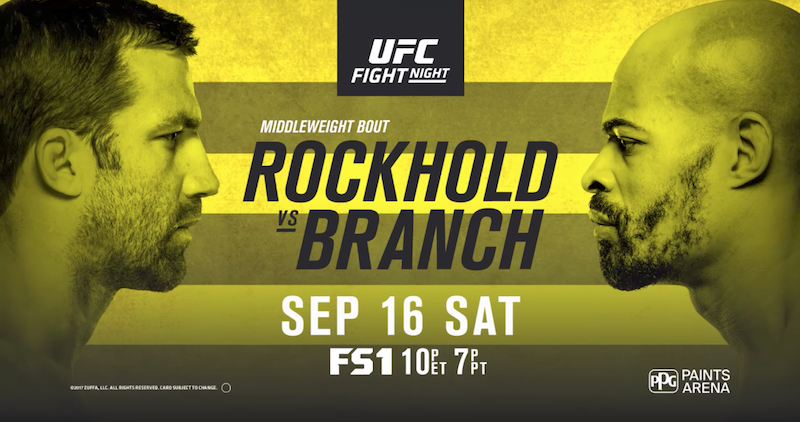 Luke Rockhold has been out of action since dropping the UFC Middleweight title to Michael Bisping at UFC 199 in June of last year. Rockhold was knocked out by the late-replacement Bisping in the first round. The American Kickboxing Academy product was expected to face Ronaldo “Jacare” Souza in a rematch at UFC Fight Night 101. However, the scheduled bout was canceled due to Rockhold withdrawing from the bout due to an injury. The former Strikeforce Middleweight Champion is 5-2 since making his UFC debut in 2013.

David Branch made his UFC return with a split decision win over Krzysztof Jotko at UFC 211 in May. Branch is on an eleven fight win streak with his last loss coming against Anthony “Rumble” Johnson in 2012. The Renzo Gracie black belt found a home in the World Series of Fighting promotion after his first UFC stint ended. Branch submitted Jesse Taylor in the WSOF Middleweight tournament final to become the promotion’s inaugural middleweight champion. After successfully defending his middleweight title against Yushin Okami, the New York native followed up by adding the WSOF Light Heavyweight title to his collection and becoming the promotion’s first two-divisional champion.

Mike “Platinum” Perry will look to continue his ascent up the welterweight ladder when he faces off against former UFC Welterweight title contender Thiago Alves. Perry is coming off a Performance of the Night victory over Jake Ellenberger in April. Platinum stopped Ellenberger in the second round with a brutal standing elbow that earned him $50,000 in bonus money. Alves recently made his return to the welterweight division after a failed attempt at fighting at lightweight. The American Top Team representative missed weight and lost to Jim Miller at UFC 205. Thiago returned to the welterweight division and rebound with a win over Patrick Cote at UFC 210.