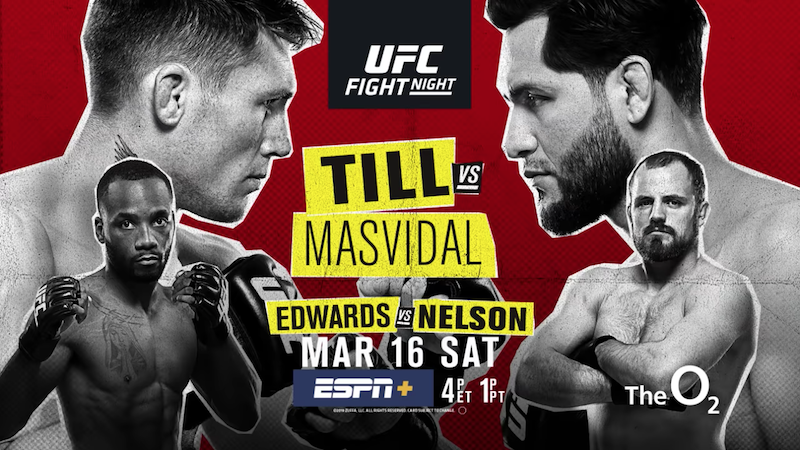 Darren Till takes on Jorge Masvidal at UFC Fight Night on Saturday 16th March at the O2 Arena in London. The co-main event will see Birmingham’s Leon Edwards face off with the talented Gunnar Nelson in the Welterweight division.

Main Event: Darren Till vs. Jorge Masvidal
Darren Till (17-1-1) will be looking to get back in the win column after suffering his first defeat in the Octagon. Till failed in his attempt to dethrone then UFC Welterweight champion Tyron Woodley at UFC 228. The Scouser worked his way to a title shot by picking up 5 wins and a draw inside the Octagon. Darren’s breakout performance came against veteran Donald Cerrone in Poland, where Till stopped Cerrone in the first round and earned himself Performance of the Night. Till later moved into title contention after defeating Stephen “Wonderboy” Thompson via unanimous decision in Liverpool.

Jorge “Gamebred” Masvidal (32-13) will be in a must-win situation when he steps inside the Octagon on Saturday night. The tough veteran returns to the Octagon for the first time since 2017, where he lost back to back decisions to Demian Maia and Stephen Thompson. The American Top Team representative’s last 3 wins were against Ross Pearson, Jake Ellenberger, and Donald Cerrone. The former street fighter picked up the Performance of the Night and $50,000 in bonus money for his brutal stoppage of Cerrone.

Co-Main Event: Leon Edwards vs. Gunnar Nelson
Former BAMMA Welterweight Champion Leon “Rocky” Edwards (16-3) will look to continue his rise up the Welterweight ladder when he meets Gunnar Nelson in the co-main event. Edwards last appeared in the Octagon against Donald Cerrone in June. Leon defeated the veteran fighter after five rounds of action for the Unanimous decision victory. Rocky is currently on a six-fight winning streak in the UFC.

4x Performance of the Night winner Gunnar Nelson will be looking to put on another show for the UFC fans on Saturday night. Nelson is 8-3 in the Welterweight division since joining the UFC in 2013. The Renzo Gracie Black belt submitted Alex Oliveira with a rear naked choke at UFC 231 in December.